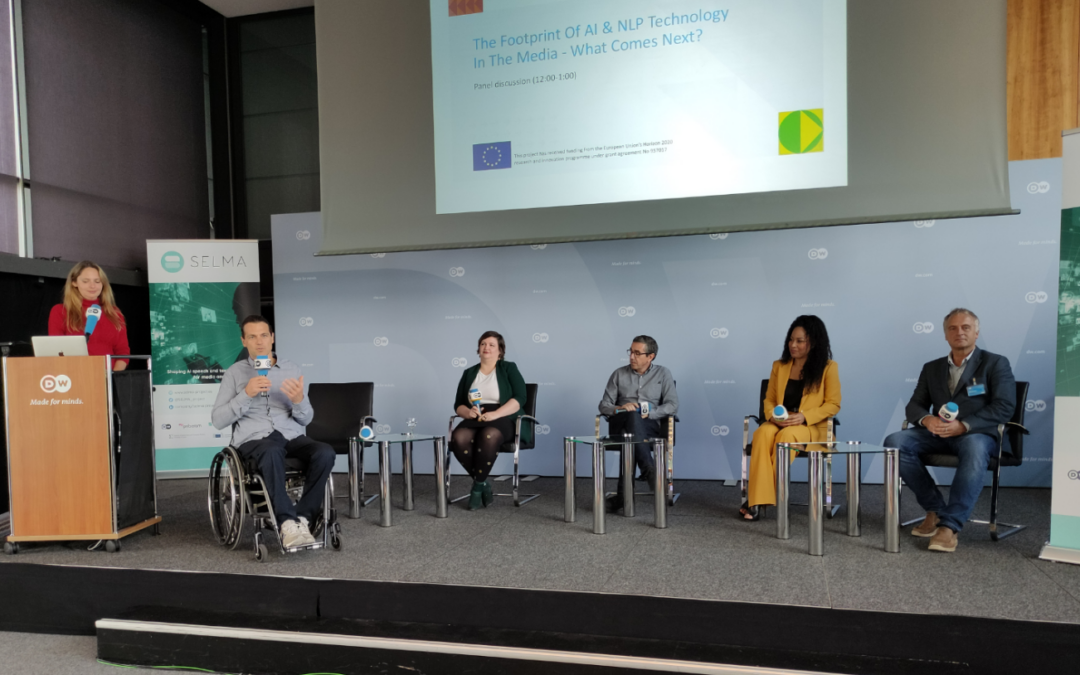 What’s new in the multilingual newsroom in terms of AI-supported tools? How to produce content which is available in many languages and formats and which is accessible to people with disabilities? How to monitor vast amounts of data and cluster information in terms of people, topics, and diversity characteristics? The first SELMA User Day on October, 12th 2022 brought together media people from many European media houses and companies including BBC, ARTE, and Lusa (the largest news agency in Portugal) online and on the spot at Deutsche Welle in Bonn. It gave insights into the latest advances in language technology and how journalists are already working with it. And of course, it showed what projects paved the way at Deutsche Welle starting more than two decades ago (watch the session with DW’s Peggy van der Kreeft about “Artificial Intelligence (HLT) & The Newsroom”).

The amount of data is increasing by the second. The challenge is how to keep track and make sense of them – both from a technological perspective and also from a media monitoring view. SELMA is creating a backend that allows searches in extremely large data sets (up to 10 Million news items a day) and which enables us to use advanced NLP tasks (including transcription, translation, voice-over, summarization, and speaker recognition).

Human language technologies have made much progress in the last couple of years: Better and faster processing and a much improved overall performance. The question is: Do also media people (journalists, editorial boards) benefit from the progress?

Two tools in the spotlight: plain X and Monitio

Many tasks which involved quite heavy resources only some time ago, can virtually be done by pushing a button, on-the-fly. plain X comprises many language tasks in one tool. Transcription – turning speech into text – is one task and bringing the transcript into a format that shows subtitles for deaf and hard-of-hearing audiences is a second powerful task. Also, it can translate and create voice-overs into many of the 30 (plus) languages SELMA is covering (watch the plain X session presented by Peggy van der Kreeft).

Another powerful tool that was shown at the User Day was Monitio, presented by Sebastiao Miranda from Priberam, an SME from Portugal. Monitio searches and analyses content  – currently up to 200,000 articles a day from around the world, including DW feeds in 30 languages. An important aim is to deliver information and indications for better decision-making (watch the Monitio session video to find out more).

One of the most recent (research) developments is that Monitio also can show diversity data for public figures, for instance, politicians, based on information derived from Wikidata. How diversity data can be used to support the newsroom in decision-making and producing content for a diverse audience is presented in the “Counting Diversity” session from Mirjam Gehrke and Kay Macquarrie, both Deutsche Welle (watch the Diversity session here). User soundbite: “It gives me an instant overview of our output and shows me, where our weak spots are. A lot to think about!”

Do you prefer audio? Yes, it is also possible to create a speech based on transcripts. So-called text-to-speech synthesis works in many languages and can even be customized to specific voices. LIA (Laboratoire Informatique d’Avignon) from the University of Avignon showed how voices are trained and “digital twins” are being created.

An innovative prototype is the Podcast Creator. With its help, users can create a podcast almost on-the-fly using search, summarization, and speech synthesis techniques (watch a demo on creating a podcast). One user pointed out: “This is great because it will save a lot of time, which can be used in doing more research and make the program better.”

So, what is the “Footprint of AI & NLP Technology In The Media?” and what are the next frontiers including ethical limitations? Listen in to the panel consisting of four experts in the field sharing ideas from various perspectives: Industry, Journalism, Archives & Information, and Diversity. Watch the panel video here.

The SELMA User Day showed the status of the tools after the roundabout half-time of the project. A second User Day is coming up in 2023. So, stay informed via the SELMA website and follow us on Twitter, LinkedIn, and GitHub. Hope to see you soon!